(2 Aug) La Dernière Incarnation (2005, Demian Fuica) 36
[ While bird-watching in the woods, dorky accountant Marc-André (Gilbert Turp) witnesses the arrival of a naked woman (Catherine Florent) in a burst of electricity, placenta and puke. He takes her home and soon realises that he didn't find her, she found him. She is Mirah, an extraterrestrial being who keeps reincarnating herself across the universe. She hasn't been on Earth since 5000 years ago in ancient Mesopotamia, where she made a mistake that involved Marc-André in a previous life. Now she's back to fix things, digging out the dumbfounded Banque Nationale employee's third eye and guiding him in the use of supernatural powers he didn't know he possessed. This sounds really bizarre and complicated, but I have barely touched upon the surface of the incomprehensible but intriguing inter-dimensional mythology against which the action is set. "La Dernière Incarnation" is a thoroughly independent local production that doesn't always works but that is admirable for its originality and ambition. It could be more tightly plotted and the way it randomly swings between taking itself seriously and going for camp is puzzling, but the special effects are surprisingly decent and most of the performances are entertaining. Leonardo Fuica is imposing as the Lovecraftesque villain, Emmanuel Auger and Dominic Darceuil play well off each other as mysterious men in black sent to investigate the goings-on and Catherine Florent is a lot of fun as Mirah, who spends the whole film getting use to her (gorgeous) new body, kind of like Jeff Bridges in Starman. As for Gilbert Turp, I'm not sure if he's a bad actor or if it's the characters he plays that are supposed to be this offbeat, but that fits with the overall strangeness of the movie. Your enjoyment of "La Dernière Incarnation" will vary depending on your tolerance for long "mind battles" in which actors make mean faces and hold out their hands like mimes while being blown at by wind-machines. ]

(4 Aug) San-Antonio (2005, Frédéric Auburtin) 8
[ Starring Gérard Lanvin as the titular character, who might get more tail than James Bond but whose detective work makes Inspector Clouseau look like Sam Spade, and Gérard Depardieu at his most loafish as his partner, "San-Antonio" is a dumbfounding succession of moronic gags, feeble action scenes and random oral sex and ass-grabbing. I haven't read a single title in the San-Antonio series, but if the best they could squeeze out of 175 books worth of material is this irrevocably awful picture, I can't imagine how painful it must be to go through thousands of pages of this crap.

The contempt the flick inspired in the French press is pretty funny, though:

(4 Aug) Heaven (1998, Scott Reynolds) 63
[ Produced then shelved by Miramax, "Heaven" ended up going straight to video, but not before playing at the 1999 Fantasia Festival, winning the Best International Film Award and catching the eye of a Comic Book Guy who, years later, heartily recommended this unknown little flick to me. Following a gambler who must deals with his ex-wife trying to get sole custody of their son, a psychic stripper chick with a dick and a bunch of double-crossing assholes, it's less interesting for the story than for the way it's told. Non-linear chronology is nothing new (Kubrick was at it already in 1956's "The Killing"), but it's particularly cleverly used here, certainly better than in the other "post-modern" crime flicks that followed in the wake of Tarantino's re-actualisation of this storytelling style. "Heaven" is still pretty derivative and the uneven acting doesn't help, but I can see what got the Fantasia crowd and Comic Book Guy excited. ] 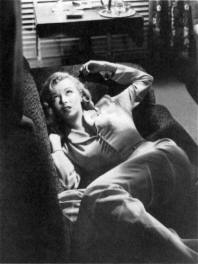 (7 Aug) The Asphalt Jungle (1950, John Huston) 65
[ Herr Doctor's got a plan for a caper, but he needs a financier, a box man, a getaway driver and a hooligan. And when you're doing a heist, the most people get involved, the most double-crosses and finking are likely to happen. Like "The Maltese Falcon", Huston's earlier film noir, "The Asphalt Jungle" has stark B&W cinematography, snappy dialogue, tough guys and knockout dames (including a young Marilyn Monroe), but it sorely lacks a Bogart-strong leading man. Nonetheless, this twisted and morally ambiguous yarn about the greed and treachery of men kept me engrossed. ] (8 Aug) Villa Paranoia (2005, Erik Clausen) 52
[ A depressive failed actress is hired by a depressive chicken producer to take care of his depressive elderly father. This is a grey, overcast, very Scandinavian melodrama, but it's occasionally quite humorous. Sonja Richter's character is kinda kooky, like a Danish "Amelie", pretending to be a pyromaniac or a bank robber for fun. Director Erik Clausen is slow getting to his point, but it does pay off sentimentally. More instantly rewarding is Manuel A. Codina's "Emilio", a cool short film being shown before "Villa Paranoia", starring Mario Saint-Amand as a giant cat. ]

(9 Aug) Boudu (2005, Gérard Jugnot) 21
[ Between "Oui, mais", "Monsieur Batignole" and "Les Choristes", Gérard Jugnot might just be the most sympathetic working French actor. What's the idea of building a whole film around the constant abuse and humiliation of his character and expecting it to be hilarious? Maybe I'm too sensitive, but watching poor old Jugnot made to feel like the biggest loser in the world for 90 minutes was an extremely depressing experience. Boudu has Jugnot playing Christian Lespinglet, an art dealer who saves a man trying to commit suicide and kindly takes him home, then realizes that getting rid of the guy is impossible. This is almost exactly the same premise as "Après Vous", released earlier this year, except that the lost soul is a fat smelly wino (a typecast Gérard Depardieu). Lespinglet understandably wants to get rid of the big slob, who soon proves to be not only ungrateful but clearly psychotic, but his bored childless wife (Catherine Frot) insists that they should keep taking care of him. The ensuing scenes follow the beats of a rollicking farce, with the characters constantly exchanging quips and slaps and every other scene ending with someone slamming the door. But as mentioned, these proceedings feel more cruel than funny. Christian is just a nice guy trying to get along, and all he gets for it is having his home and his wife taken away from him by a disgusting stranger. Worse, the crazy homeless jerk is glorified by the film, which expects us to learn valuable lessons from this supposedly free and charming wild child who's never worked a day in his life. How much liberal guilt do you need to come up with such hogwash? What's wrong with being educated, earning a living and having good manners? ]

(9 Aug) Ice Princess (2005, Tim Fywell) 80
[ Science geek Casey (Michelle Trachtenberg) is brilliant but unpopular, her feminist mother (the GREAT Joan Cusack) wants her to pursue this great academic career, but what she really wants to do is figure skate.
"You can't do this, Casey. You're giving up your dream."
"No, mom. I'm giving up your dream. I'm going after mine."
It ain't easy being a teenage girl... But why am I identifying so much with this? I shouldn't be moved to tears by corny Disney tween flicks, but here I am, desperately rooting for Casey to follow her dream, give the bitches their comeuppance, win her mom's approval and get it on with the Zamboni driver! Whatever critical objectivity I have left can see that this is just a string of sports movie clichés and girly pop montages, but I'm loving it so much! There's actually some good satirical stuff about high school athletes and the pressure their parents put on them, and Trachtenberg pours so much pathos mixed with good spirit into Casey that we can't help but be with her every step of the way. YMMV, etc. ]

(14 Aug) Sealab 2021 - Season One (2000) 63
[ A sly spoof of old Hanna-Barbera cartoons, "Sealab 2021" is filled with non sequiturs, absurdity and political incorrectness. The voice actors are particularly funny, the cruddy animation is oddly charming and the theme song is as catchy as it gets. "It's like a koala bear crapped a rainbow in my brain!" ]

(19 Aug) The Hamster Cage (2005, Larry Kent) 66
[ The latest from the unheralded godfather of independent Canadian cinema is all about hatred, murder and incest. And it's a comedy! Needless to say, this is an odd duck. At first I thought it was hilarious, then when it got really heavy and amoral, it made me feel uneasy and I didn't know what to think anymore... I slept on it, then the next morning, it was still on my mind and the more I reflect on it, the more fascinating it seems... Interviewing Larry Kent (for VOIR) added even more layers to the experience. "I blew a Nobel Prize winner. Freaky!" ]

(24 Aug) Wahrheit oder Pflicht (2005, Jan Martin Scharf & Arne Nolting) 49
[ A high school twist on "L'emploi du temps", it revolves around a German 18 year old who, afraid to let her parents know she's been kicked out of school because of her bad grades, pretends she's still going to classes when all she actually does is hang out in an abandoned bus and get caught in a screwed up love triangle. Credibility is not one of this film's strong points, and neither are cohesiveness or character depth. Still, it's got a nice Dogme-like looseness to it and Katharina Schüttler is touching enough in the lead. ]